Home » Imam Hussain » A Journey to Karbala : Searching for Hussain 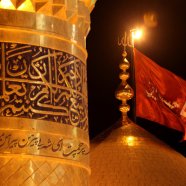 A Journey to Karbala : Searching for Hussain 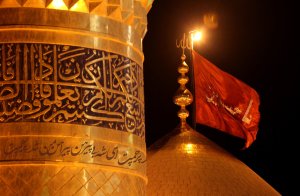 “They come from everywhere!”

I grinned at Zainab as she smiled infectiously. I was taken by her excitement. She was so thrilled by the various stations set up along the path to the shrine of Imam Hussain, and so humbled by the people who lined the streets to serve refreshments to the pilgrims… to serve tea to her. That same tea that was offered with a smile to each individual visitor, the giver’s hand never once betraying the hours of service spent brewing and distributing. She held a plate of steaming rice in her hand as we walked. It had a lovely taste to it, like a saffron infused welcome.

No wonder she had pleaded with me not to eat before we began our journey.

Zainab was my tour guide; she was full of useful advice. A native of Karbala, she knew how to navigate the crowds during the days leading up to the 40th night of Muharram. She knew how to walk with direction and purpose, and how to avoid being swept up amongst the millions of people from all over the world who came with the same sense of urgency. Zainab guided me away from the crowd that had gathered near Maqam Zainab, her beloved namesake, and toward the shrine of Zainab’s martyred brother, her beloved Hussain.

My young guide never really paused for anything but the bountiful gifts that honored the givers- and even then it was only to show her appreciation for their generosity.

She never once paused to listen to those reciting poets lament in their native tongue.

I secretly wished she would. Their voices rang in my ears as I followed her, becoming part of the oratory background rather than a part of the experience. I was acutely aware of their presence, but I couldn’t absorb the meaning behind the chants. I couldn’t stop to listen without breaking the hurried pace. All I could hear were names being repeated, a reminder of those who had made this journey before me.

“Abbas, Abbas…”
The evocative sound cut off as we hurried along our way.

My desire to stop increased. It was as though, for the first time in my life, I understood the significance of this mourning tradition. My practical distaste toward ritual, something I had struggled with throughout my life, melted away as I was exposed to the myriad of spiritual expression around me. I suddenly felt saddened by the lack of appreciation I had for these traditions in the past, and I knew it was because this experience had moved me. Everything around me was a reminder of how important traditions of commemoration were to preserving this Hussaini message I had cherished throughout my life.

These commemorations! This is why the tradition has remained alive. These chants were the reason the traditions of Karbala had survived the propaganda campaign of a brutal dictator. The reason people from all over the world came here despite the likelihood of instantaneous death at the hands of extremists. Why pilgrims from neighboring countries flocked despite years of state sponsored xenophobia and racism.

Despite millions killed in senseless wars.

This was part of the driving force… this expression… this… poetry. This continuous ritual of mourning that had embedded itself into traditions all over the world.

It was  because of them– these humble students of Hussain, each reciting aloud in the streets of Karbala, emboldened by this delicious freedom. Each of them passing their poems to their children to remind them that this tradition would soon be their own. Reminding them that this was a journey that surpassed language, culture, and tradition. That, even more fittingly, this journey had not only surpassed their own intimate accounts of human suffering; it had been strengthened by it.
My young tour guide walked with determination, oblivious to my thoughts. She walked with an appreciation for her surrounding that was effortless on her part.
I, on the other hand, was completely overwhelmed.

She paused at my request, too polite to continue walking while her guest wanting to stop. She turned to look at me and gave me a cautious smile, perhaps pausing to finally appreciate the enormity of the exhilaration and exhaustion betrayed by my expression.

So we stood still for a minute among the bustling crowds to actually listen to the melodious chants, the products of deeply entrenched tradition.

The pilgrimage described is the journey Shia Muslims make from around the world to visit the shrine of Imam Hussain in Kerbala, Iraq during the Islamic month of Muharram. The journey is undertaken to commemorate the martyrdom of Imam Hussain and to revisit the spiritual, political, and social messages embedded in the sacrifice of all those who participated in this journey with him.

References to suffering, war, and religious persecution are all reflections on the treatment of many Iraqi Shias under the dictatorship of Saddam Hussain. They are also in reference to the present day acts of indiscriminate unconventional political violence inflicted on peaceful pilgrims each Muharram by transnational terrorist organizations.

The author is Iraqi American and has a MA & BS in Political Science. She regularly writes about gender, politics, and spirituality.
Read more at Saja’s blog
vivalakhabatha.wordpress.com

← What is Muharram? Omid Safi: Martyrdom of the Prophet’s Family, then and now →