Home » Ashura » Aun Hasan Ali : Some thoughts on the remembrance of Karbala 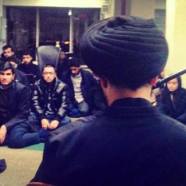 Aun Hasan Ali : Some thoughts on the remembrance of Karbala

Now that the mourning season is upon us once again, it is a good time to reflect on the ways in which we remember the story of Karbala. It has been my observation that we primarily view the events of Karbala through the lens of revolutionary politics: Yazid symbolizes injustice and Imam Husayn symbolizes the heroic fight against it. In this context it is only natural that we are pushed to honor Imam Husayn by standing up to all forms of oppression, concrete and abstract. It should also come as no surprise that many Muslims, especially adolescents, complain about the futility of tearful sermons and conventional rituals.

There is no doubt that it is a religious duty to oppose injustice. In his last breaths the Lion of God urged his two princes to, “Stand with those who are oppressed against tyrants.” And Imam Jafar al-Sadiq is reported to have said, “The oppressor, the one who aids him and the one who is pleased with it, all three are partners.” But is the story we passionately retell at the beginning of every year primarily a call to political action?

One of the tragedies of modern life is the monopoly of reason. Keats’ lament that Newton would unravel the rainbow and clip an angel’s wings was prescient indeed. I find it increasingly difficult to access those aspects of my self that are not meant to be governed by reason. I cannot appreciate Mir’s couplets without analyzing them, and the expression “subḥāna rabbī al-a‘lá wa-bi-ḥamdih” has become a philosophical project of tanzīh and ithbāt. The majlis of Husayn is one of the few places left where I can still access something visceral. It is one of the few times that I experience the tranquillity of a mode of knowledge that is not discursive. That is precious to me and I’m not willing to give it up for yet another rational act like political mobilization.

Young people are often disappointed with what they hear in Muharram because they come to acquire information when these gatherings of ours are really more akin to theater. Like newcomers to the garden of poetry, they have mistaken the mazmun (theme) for the ma‘ni (meaning). Imam Jafar al-Sadiq is reported to have said, “Anyone who recites tearful poetry about Husayn is destined for paradise, and his sins are forgiven,” and, “All praise belongs to God who created people that visit us, praise us and compose elegies in our honor.” In another tradition he asks Abū Hārūn al-Makfūf to recite poetry for him the way it is recited at the grave of Husayn, not in an ordinary fashion. And Abu’l-Ḥasan-i Thānī ʿAlī al-Riḍā is reported to have said the following to a poet: “I would like you to recite poetry, for this is a period of sadness for us the House of the Prophet.” These traditions reveal a side of the Imams keen on the performative aspect of remembering Karbala.

What I want to suggest is that our annual commemorations are really about two things: First, they are meant to be spaces where we rehearse our communal identity and grow familiar with a web of meaning. Now, when one hears the line “shoʿlah-i ṭūr-i qul kafá, shamʿ-i firūz-i innamā” tiny bumps all over the body are awakened, like devotees answering the call “naʿrah-i Ḥaydarī!” Our attachment to the House of the Prophet is mediated through universal values like valor, patience and fortitude. The farsh-i ʿazā is where these values are rehearsed in order to reaffirm and strengthen our bond to that paragon of virtue.

Second, our gatherings are about jazbah or “viscerality.” Ṣāḥib-i Lawlāk Muḥammad-i Muṣṭafá is reported to have said, “There is a burning in the hearts of believers for the murder of Husayn that will never grow cold.” This burning, this jazbah is what will carry us through difficulties in life, especially the crises of faith becoming all-too-common. As one poet puts it, “muddaʿā dil mei(n) jo hai vohee moo(n) se nikle; jo larkada ke giroo(n) to moo(n) se ya Ali nikle.” There are plenty of spaces for the cultivation of our rational selves. What we desperately need is a space to fashion our children in a way that the mere mention of Ali lightens their hearts, and the name Husayn brings tears to their eyes. May those tears flow freely this year, and may they extinguish the fires of hell kindled by our sins.

Aun Hasan Ali earned a BA in religion and philosophy from Rutgers University in 2003, graduating with highest honors. In 2007 he earned an MA in Islamic Studies from McGill University. He is currently a PhD candidate in Islamic Studies at McGill. His areas of expertise include Islamic history, law and theology. He is also a research fellow affiliated with Jami’at al-Mustafa in Qom, Iran. He is the recipient of numerous awards and his work has been published in scholarly journals and encyclopedias, including the recent Oxford Encyclopedia of Islam and Law for which he wrote two articles on Islamic legal theory.

← Iraq : A Portrait of War, Peace and Pilgrimage Zainab In my eyes →