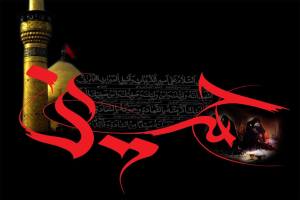 Written on the green chalkboard was the word “Karbala”.  I was six years old–sitting in a classroom full of children, while our parents and older kids attended the main Majlis program upstairs. The instructor narrated the story of Bibi Sakina and Hazrat Ali Asghar (two of the youngest members of Imam Hussain’s family present at Karbala) . At various instances, children would raise their hands and ask questions or relate comments about other details of the story of Karbala that they remember from their parents. But most of all we were all sad, because we realized that Sakeena was even younger than most of us when she suffered a tragedy we could never fathom.

“Who can tell me what a Shaheed is?” the sister asked the class. Little hands shot up, when the girl sitting next to me, whose name also happened to be Sakeena and could not have been any older than I was, was called on. “Shaheed is someone who has given everything for Islam,” she said, her eyes beaming with confidence. The tragedy of Karbala is full of such examples, individuals of unparalleled character that sacrificed everything for their principles and desire to preserve the untarnished message of Prophet (pbuh).

The instructor asked: “Is anyone in this room brave, principled, are you good muslims?” Of course everybody said they were brave. “Me! Me! I’m brave!” hands shot up again, fingers wiggling and waving with enthusiasm.  “Yeah, my mom said I’m very bahaadur. That means brave.” Said a boy matter-of-factly, sitting behind me.

But I looked down. I was terrified, and I was ashamed. Because I knew in the pit of my stomach, I was not brave at all. I teared up just at the mere thought of not seeing my parents. I wasn’t sure I could ever fight for any reason at all, not even Allah, a being that I was worried I hardly understood, in contrast to everyone else in the room it seemed.

Fast forward all these years, I recently read this article about a police officer in Iraq, who upon witnessing a suicide bomber attempting to massacre some dozens of pilgrims near Baghdad, hugged him to stifle the impact thereby saving countless lives at the expense of his own.

He was a Shaheed.

There was young Aitzaz Hassan, a boy of 15 in northern Pakistan who without a moment’s hesitation told his friends to stay put as he rushed to tackle yet another suicide bomber, saving the lives of all his classmates and faculty, leaving them all behind with just his fond memory.

Undoubtedly, this angel was a Shaheed.

I remember two years ago, when we learned about the Newtown school tragedy last December, there were reports of the school principal who acted as a one woman barrier between the children and the monster, sacrificing herself.

She was a Shaheed too.

When I read stories about brave men and women like these, dying to save others, dying for such a noble purpose, I think to myself, what would I have done if I were in their position? Would I have been brave like them? Would I be paralyzed with fear? Or, worse, would I try to discreetly save myself above the rest?

And then I think about the family of the Prophet, and their suffering at Karbala and Shaam. There is a reason why 1400 years later, every year, we remember them and the injustice they faced, the oppression that they fought, for our sake. We, the generations of Momineen who would follow the true Islam of the Holy Prophet and the Ahlul Bayt.

And then I think about their companions. The truest Shias. The followers of the Ahlul Bayt who chose the path of righteousness and chose certain death and the ultimate sacrifice for the love of Imam Hussein and the Islam he saved.

It is when I think of these Shias that my darkest fear creeps in, the fear that if I were in their place 1400 years ago, what if I could not be brave like them? I struggle with this question. I want to say, “Yes of course I would be brave like them, I’m a true Shia and lover of the Ahlul Bayt, there isn’t be a question about it.” But I feel unworthy of that certainty. Their sacrifice was nothing small. It is easy to imagine ourselves so far removed from that battle in the scorching desert heat. That was 1400 years ago, why should we have to worry about that choice that the camp of Imam Hussain made?

Because for us, the love for the Ahlul bayt was handed down to us. We were lucky to grow up with it. We inherited it. We did matam no sooner than we learned to stand. We sat with our mothers on their janamaaz and played with the tasbeeh, and they taught us Allah Ek  (God is One) and Panjatan Paanch (The Five Purified) as soon as we uttered our first words.

Islam and love for the holy family were ingrained in us for longer than we could remember, and in our every waking moment. The fact that any of this happened at all is because of what happened that fateful day 1400 years ago on the tenth of Ashura. Our very existence, and this convenience of growing up with a heritage of Shia faith, is owed to Imam Hussein, Bibi Zainab, their family and their companions. Surely then, we must hold ourselves to a higher standard than living with the assumption that we are far removed from Karbala. That we should be any different than those companions of Imam Hussein, the truest of Shias, in our loyalty and our piety, in our steadfastness to do what is right.

Of course, times are different. The land is different. Though many in the world are living in a time of war, and Shias and non-Shia alike are suffering all over, those of us here today, most of us here in America, live a very different life.Our lives are very different from those noble souls of 1400 years ago, and moreover what keeps our parents up at night is the fact, that well, our lives our very different from even theirs just a generation ago.And certainly, the only measure of a momin cannot possibly be someone who dies for Islam on a battlefield, or outside a holy site for pilgrims, like the Iraqi policeman. The truth is, because we are not far removed from Karbala at all, here, today, throughout our lives, it still continues and it follows us. It’s just that our battle is different.

We may not have to ever choose between certain death or life, but we have so many other choices to make. All of these choices are important. From the obvious ones like: What am I going to be when I grow up? What career path will I choose? To the less conscious ones, such as: Which friends will I choose? Which people will I surround myself with? To the almost trivial: How will I be spending New Years Eve?

Every choice that we make has consequences. Each decision has an impact on our life and on others, big or small. And each decision that we make matters as we represent the followers of the Ahlul Bayt and remember the sacrifice that they made for us.

There is poverty in the world that we can never begin to imagine the extent of, whether thousands of miles away in Asia and Africa, or just a few miles away in New York City. There are hungry and sick and helpless men, women and children, so Inshallah when we choose our career path, in the spirit of the generosity of the Ahlul Bayt, may we always keep our less fortunate bothers and sisters in humanity in mind, and strive to help them and those close to us, whenever we can, and remember the example of our Imams who gave to the poor even when there was no one around to see, Ameen.

There is unkindness in this world, and ugliness in character, whether in politicians and lawmakers of governments, in the media and society at large, or even unfortunately amongst ourselves, and within our very beings. So Inshallah, in the spirit of the kindness of the Ahlul Bayt, may we all better ourselves and forgive each other, speak only highly of each other, and always be good to each other and all of the people we come across in life, regardless of who they are, Ameen.

There is vulgarity in this world, you know, all the stuff that our parents have nightmares about. Their fears are understandable. So in the spirit of the piety and purity of the companions of the Ahlul Bayt, as we all complete high school and college, and our twenties Inshallah, may we find the right path, and may we make the right daily choices and surround ourselves with good people who encourage the best in us, may we realize that there is value in good character and if we ever go astray or fall in the wrong crowd, Inshallah may we find our way back and realize there is salvation in repentance, Ameen.

And there is injustice in this world. So much injustice translating into inequality in society, education, health care, law and often violence, oppression and persecution, which so many of our Shia brothers and sisters are living under in Pakistan and Iraq, as are countless innocent non-Shia all over the world and in our own neighborhoods.  Not a single one of us exists in a vacuum. In the spirit of the bravery and resilience of the Ahlul Bayt, may we all have the power, the courage and the strength Inshallah to speak up and stand up against injustice big or small and do what is right for the sake of others, and always remember Allah and our duty as Shia, Ameen.

In each decision that we make, may we make the right one and be worthy of the love of the Ahlul Bayt, worthy to be counted among the Shia, like the truest Shias who were the companions of Imam Hussein and Bibi Zainab at Karbala, Ameen. 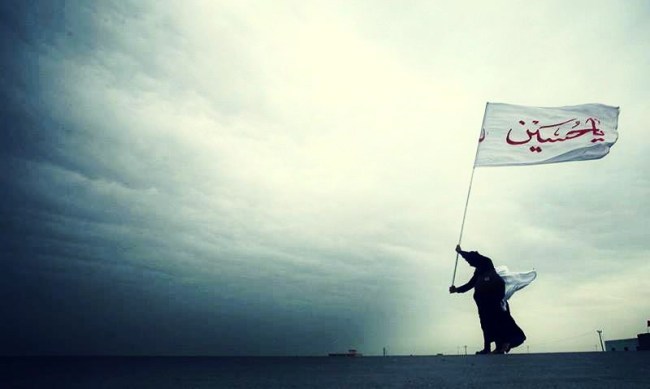 Man Raises A “Ya Hussain” Flag

Mirzya Syed is an aspiring novelist, she graduated from Columbia University where she co-founded The Muslim Protagonist. She is currently a graduate student at Drexel University.

← Zainab In my eyes Poetry : The War of Alphabets →